Stormwind’s LocalDefense started raging, so a couple guildies went to check it out and found some Horde holding the Mage Tower area.  I finished my daily quests, and got everyone to group up in the portal room in Dalaran for buffs.  We portaled through, an they were already dead.  They rezzed up in the basement of the inn, and we killed them, but it took some doing.  I was amazed when the every single Alliance left the basement to let them rez and buff.  See screenshot above.  They came back, and we got them down again.  No one in our raid died either time, so I was pretty happy.  Didn’t feel like waiting around for more basement camping, so I headed off to do some Headless Horseman.  We already had them probably 3 or 4 to 1. 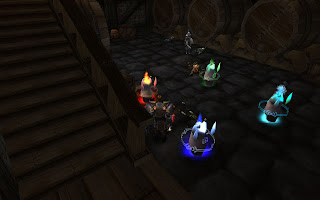 Apparently they rezzed and summoned more.  People were going crazy about them holding the bank.  I happened to be on my Rogue at the time, so I had everyone meet on a bridge, buff up, gave a quick strategy, and we went in.  It was a MAD HOUSE in the bank, but we cleared them out!  This time I stuck around until they portaled out from the Visitor Center. 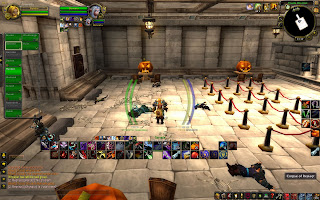 One of many incursions by