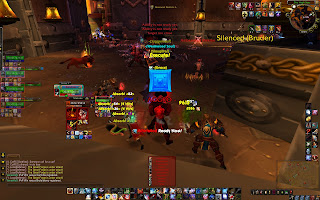 Yulia mentioned Ironforge’s King was getting a visit from the Horde, so we bounced over there to do a little defendin’ and help her out.  Rolled right in, and the Horde got rolled right out!  Camped them until they spirit rezzed, or hearthed out!  There were several other Alliance defenders as well, so we certainly had the advantage!  About the time we started getting bored, Stormwind started pinging, and then we REALLY got some help! 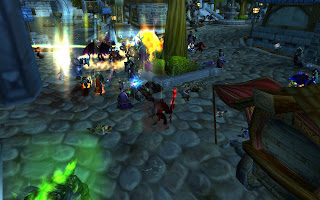 We formed up, and rolled right into the Trade District where Reckoning Day was recking people’s day.  Yes I feel clever.  We bounced them out at first, then they gathered up below and headed out of the city down the road.  Just before Goldshire, we interrupted their attempt to summon more people!  Took them totally by surprise from the looks of it, and we chased them off to the four corners of Elwynn!  We finally backed up and let them regroup.  Gave ’em about 10 or 15 minutes before breaking off to do our own thing at precisely 11:00pm (server time).  THAT was fun!


(Some Horde in Ironforge may have been below 80, Kadann through Mekake)