…four hours after that

I dueled more rogues, though more as Retribution.  Though I did fight a couple Shadow Priests, and one choked the Underbelly Elixir and flew up to the ceiling and just spammed devouring plague on me just as fast as I dispelled it.  I lost, but it was kinda funny.  Not a single Death Knight or Hunter, but in between fights I respec’ed my Retribution tree.  Oh, and by rogues, I mean Nightrecluse.  The guy is RELENTLESS.  Duel.  Duel.  Duel.  Wow.  Insatiable.  That’s what she said.  GOODNIGHT! 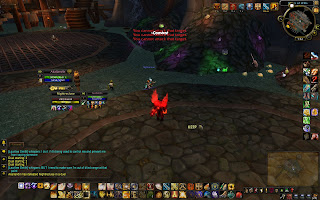