No coffee, no way. 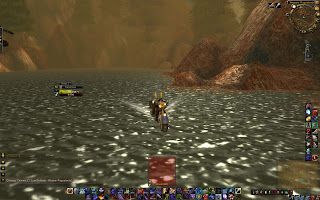 Couldn’t sleep, woke up early, and someone asked in one of the channels if anyone wanted to go stir up the hornet’s nest, so I volunteered.  Just as we started making our way there, the server thought it wanted to go down.  So we hung around in the area killing stuff.  I went to check on the rare spawn in the catacombs, when a couple of lowbies came strolling by.  Caught one while the other slinked off.  Luckily they had their mains parked somewhat nearby (we waited long enough for them).  They caught me away from the other group, and apparently my sidecar passenger was AFK.  So while I went down, at least it was funny to watch them blow their CCs on him.  Nice chain too.  I got all rezzed up, started puttering around (with my passenger AFK again) and found them watching us from across the stream.  Fight looked good for them at first, but looks were deceiving , and luckily they once again focused too much attention on our AFKer.  And at least one of the Rogues went scurrying off when the Mage bit it.  Again.

We headed up to the Scarlet Monastery for the server reset.  When I came back, our group was getting pounded by the same group, plus more!  The second I logged in, they were all on me.  So I rezzed up, and led a Rogue and Mage on a tour of the Western Plaguelands waterways.   That gave the others the relief they needed to get up to heal or hearth.  Wintergrasp popped, so we licked our wounds and headed out.

I’m enjoying all the personal attention!  It’s keeping these last weeks before Cataclysm fun-filled.  I barely have to lift a finger to summon adversaries, and they come EVERY time!