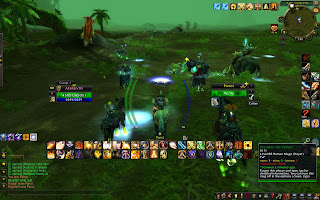 Couple guild mates were getting camped by 6 or 7 Horde in Un’Goro while we were running BGs.  Got out, formed up to go help them but the offending Horde had already left.  They had split up to different places.  So we stayed and exacted what small measure of vengeance we could.  Killed a few random Horde, then spent an inordinate amount of time trying to find a parrot for the achievement.

Not long after, the Horde started showing back up in Un’Goro and Silithus!  2 here, 1 there.  4 here, 5 there.  So we kept grabbing more, until we had 19!  Never has the Alliance been more responsive!  I guess they gave up when they couldn’t find enough people?  No idea, but they never tried facing us beyond one of their Rogues picking off a straggler here and there.

The group really did a good job of staying together.  We still had the occasional ninja AFKer, but it was certainly a huge improvement over just a month ago.  Have all but the dedicated few left until Cataclysm?