Rim!  Stormwind has a new resident.  Not by choice mind you, but a new resident nonetheless.  If you don’t know Rim, you either are not ever PvP flagged in Stormwind, or not in Stormwind at all.  For at least the past week, he has probably spent more time in Stormwind than anywhere else.  Generally, the conversation in Ventrilo goes something like this:

Normally a Rogue in Stormwind isn’t a big deal, but this guy is pretty bold.  I constantly see him there alone, or maybe even with one other Rogue.  He’s certainly not afraid to cause a scene in front of a group of Alliance be  it in Trade District or the canals.  The guy has certainly got the skills to pay the bills.  Rim, you were a Worthy Opponent! 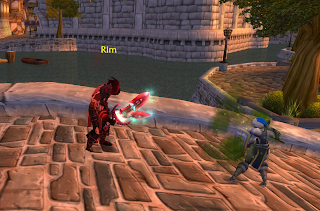