The Difference Between WvW and sPvP

I often see the question asked in Guild Wars 2 “What is the difference between sPvP and WvW?”  There are some big differences, so I am going to break PvP down into four major categories.  Guild Wars 2 does not have all four, but the other two help to provide a reference point for players of other games.  If you are not familiar with Arenas or World PvP, consider Arenas to be a smaller sPvP and World PvP to be smaller WvW.

Simply Put, WvW Is sPvP On A Larger Scale With Two Differences

First is the number of restrictions placed on each PvP environment.  The reason for the restrictions is class balance, as sPvP (tPvP) is often ranked.  This means players and teams compete for best-in-the-world.  If the classes were not balanced, then everyone would just play the same class, build, and team combinations.  Going from the highly restrictive arenas where you lose mechanics, it’s nothing but open seas towards WvW where you actually gain (siege) mechanics. 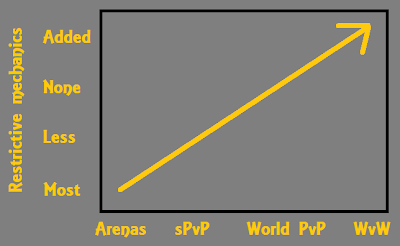 Secondly, the difference in number of players involved in each session of PvP.  World PvP obviously is a wild card, but the potential is there and you get the idea.  From the smallest 2v2 arena, to the largest 500 man WvW realm, the change in player numbers is vast.  This is because when you have more players, the class and team balance issues tend to fade away, making it less important. 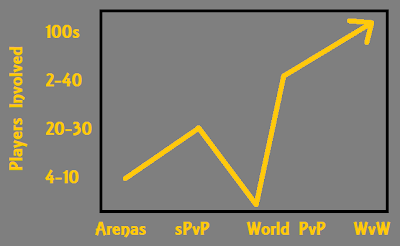 sPvP stands for Structured Player Versus Player.  This type of combat takes place in smaller instanced matches where two teams of players fight against each other over some kind of objective.  These maps are  the size of multiple football fields.  The first team to a particular point value generally wins.  sPvP has different names in different games.  Warzones in Star Wars: The Old Republic, battlegrounds in World of Warcraft, and so on.

WvW stands for World Versus World.  WvWorld is something wholly new to me.  In the span of my PvP experiences, I place it at the top of the list for fun.  There is a lot of freedom in WvW that you don’t get in sPvP.  This type of combat also takes place in instanced matches.  The difference is in the enormous size of the map, and the number of players.  There can be 500 players total in a WvW map.  One WvW realm map can span the size of multiple sPvP maps.  It sometimes takes several minutes to reach an objective on foot.  You also fight over objectives in WvW, however siege weapon mechanics are often required to breach these objectives.

Do You Want WvW Or sPvP

You want sPvP if you:
You want WvW if you:
Or maybe you like both.  I recommend trying both, and more than just a few times.  They can both teach you something that will help you in the other.  Drop a comment below about which you prefer and why!  You can also check out my Twitch.tv channel to watch me stream WvW and sPvP to see for yourself.

Proclamation of Sovereignty by the Mason Order