FINALLY.  Creating this build really kicked my butt.  I changed the runes, I changed the build, I changed the gear.  It felt like I changed it all a million times.  I finally found it by accident, really.  I call it the ‘Speed Bleed’ build for the traveling speed of the warhorn, and the focus around bleeds as a damage complement.  Surprisingly, the bleeds worked well in sPvP and WvW as opposed to going full burst.  This build is meant to serve as a highly mobile hit-and-run aggressor, as well as a support build as someone pointed out in the YouTube video comments.  The idea is to stack Vulnerability, then really bring the pain with your Volley or #6 Rune bonus, all the while draining with your bleeds.  I didn’t test in PvE beyond doing my daily, but i’m pretty confident it’ll do just fine.  The rifle serves as your main weapon, while the warhorn gets you to the fight – and out of it if need be. 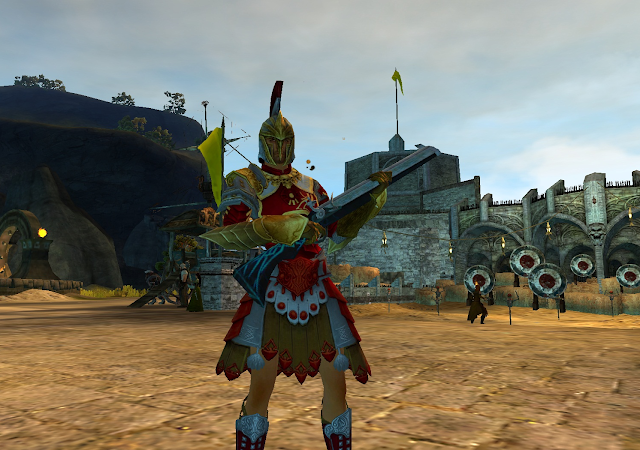 Click here for the Speed Bleed Warhorn/Rifle Build for Warriors

I have taken talents focused around bleeds and burst.  You can really burn down a target with this build, exponentially so with focus fire from teammates.  It’s great for WvW, sPvP, and PvE, and is highly adaptable.  Knight gear could also do well, but you’d need a slight adjustment to the build.  Check the customization section for more on this.

As usual, Exotic gear is best.  Being a DPS/support build, Rare gear will be a good enough foundation to build on.  The more Rare gear you have, the more of a support role you will be playing.

Carrion gear works well in this build.  Power, Condition Damage, and Vitality are your stats of choice.  This is going to be gotten from the Trading Post or crafted.  You can also scrounge some from the PvE vendors.

Carrion trinkets are easily available.  If you want to trade a little DPS for survivability, the WvW gear vendor does have Invader trinkets with Power, Toughness, and Vitality.   If you want a little more burst, you can use Knight trinkets for the extra base Critical.

An Invader’s Sword (Power/Toughness/Vitality) is optimal.  When you have your sword equipped, you’re generally running to or from a fight.  While traveling to, you won’t miss the extra DPS loss.  When escaping from, you’ll appreciate the extra Toughness.  A mace or Axe may work well in place of a sword if that’s your preference, but the sword lunge ability is great for a gap closer when chasing someone, or a gap creator when running away.  The warhorn you will want Power/Toughness/Vitality also.  For the rifle, choose something with straight DPS stats like Berserkers, Rampagers, but Carrion and Knight will work also.

The Sigil of Blood on your sword will help you regain some life when you’re finishing off enemies, or trying to escape.  The Bloodlust, Corruption, or Perception on your warhorn will help you build stacks of power, Condition Damage, or Perception.  The rifle is pretty flexible too with adding extra Vulnerability duration, adding stacks of Vulnerability, or adding additional bleed stacks.  I use the first Sigil listed for each.

The Superior Rune of Lyssa set comes in handy again.  The 6 piece bonus clears all conditions off of you, and grants you EVERY boon when you use an elite skill.  The icing on the cake is your Tactics trait Empowered, which increases your damage by about 1.5% for each boon on you.  With 8 boons (Stability is still currently bugged), that’s a total of 12% extra damage!  If you stack that with the 12% Berserker’s Power trait, that’s a lot of bonus damage.  It’s also an emergency cleanse if things get dire.  I tried a lot of other runes, but these really brought the build together.  They are a little expensive, but manageable.

You can break the burst in this build down to two parts:
Damage from boons comes from several sources.  The Runes of Lyssa and Signet of Fury elite skill combine under the Empowered trait for a full set of boons.  For Great Justice grants you three boons and is on a low cooldown timer.  More boons means more damage.  If you’re in WvW, boons will be a lot easier to come by.
Damage from Vulnerability comes from On My Mark and/or Brutal Shot.  Vulnerability adds an extra 1% damage per stack.  On My Mark adds 10, Brutal Shot adds 5, Rending Strikes has a chance to add 1, and Sigil of Frailty increases Vulnerability duration.
The ideal situation is to line up Signet of Rage with On My Mark, a 1.25 second Volley drops someone’s health quickly enough, but add to that the increased damage from bleeds.  Attack of Opportunity gives a 10% damage increase to any target that is bleeding as well.  You are going to get noticed no matter what you do.

There really isn’t a focus on defense in this build.  You do have a lot of little small things.

Your CC can be useful to either you or your teammates.

This build can be customized it according to how your own playstyle preferences.

For video of how I play this build, check out the sPvP video.  Here’s a WvW video with some of the gameplay.  As always, leave any questions, comments, or requests for what you’d like to see in a video.  If you end up using the build, I could really use some feedback.  Otherwise, enjoy!