Twitch Q&A Shines Better Light On My Future In Warcraft

I watched the World of Warcraft Legion PvP Q&A on Twitch recently. I was curious if they would respond at all to the out-pouring of players, myself included, hating on their Legion PvP progression plans. They haven’t, and it bothers me. It’s almost that feeling I got when Cataclysm was announced. That feeling when you see a train wreck coming, but you’re not in control of the train, and can’t do anyting to stop it. Well today, it feels like it was a giant communication error. I read the initial announcement several times, even sharing and discussing it with several people. I didn’t misread it, it was just explained poorly. Well today, it was explained, along with some other highlights I think are worth mentioning.

The original announcement said better players would get better gear. Which is dumb because why would a more skilled player need better gear to defeat lower skilled players? Well today it got clarified that better players just have a better CHANCE of getting better gear. That’s a pretty big gap in what was stated before. If this is the new system, I am fine with it. Blizzard should really work on it’s communication skills though, because their wording in the blog post says something completely different.

I love tanking classes. While there was some good news for this, there was also some bad. Overall they are improving tanks in PvP. They want you to see more tank specs in the arena ladders. On the down side, they don’t want tanks to be top tier. This means they don’t want you to see tanks in MLG level competition. I feel like if you can get gladiator with a tank spec, then Blizzardhas done their job well enough. Additionally, Blizzard is trying to create new roles for tanks. They want them to be front line initiators like they are in Heroes of the Storm.

They acknowledged there hadn’t been a new one in three years, and that it wasn’t a good thing. They do want to add a new battleground. The problem is they feel like if they add something new, that they would have to remove some of the old ones. To that I say, “Dear Strand of the Ancients. Die in a fire, and GTFO.” Alternately they could follow cues from Heroes of the Storm again and just make different battlegrounds available each week. Meanwhile, there are two new arenas coming! Get ready to FIGHT!

Another big announcement was made about world PvP zones. Wintergrasp, Tol Barad, and soon Ashran, were all just planned on being forgotten once new expansions hit. There are, however, discussions about revamping them to stay relevant with new content. How awesome would it be to go back to old world PvP zones? Just adding something else for PvPers to do that fits somewhere between BGs and open world PvP. 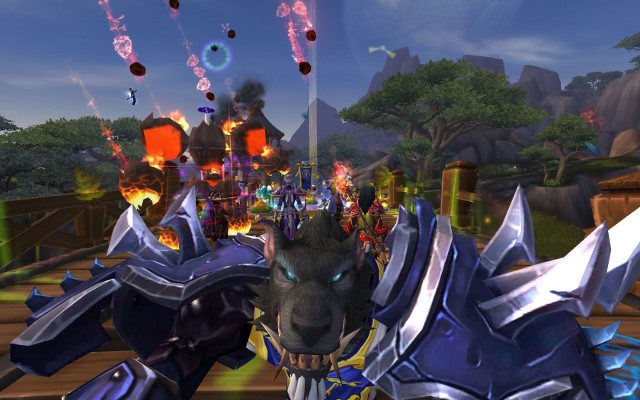 It was mentioned that they want to try and get the average player more interested in Ranked games. This means both Arena or Rated BGs. You get 50% more honor doing ranked games than regular. You also have a higher chance of getting higher ilevel gear from ranked games.

This was kind of an off-handed remark, but it was a big deal to me. There will be less chance for gimicky teams to work in arenas. For example 2 healers, 1 DPS or 3 tanks. A new balance system is coming to make arenas matchmaking less of a crap shoot when it comes to odd team compositions. 3v3 is still the only type they plan to balance.

This new RNG gear system continues to allow a chance to get better gear. So while you might have a full set of ilevel 800 gear for example, you might get an 805 if you farm enough. This is exactly what I don’t like in Diablo 3. You keep grinding for marginal gear rewards with no end in sight. Also, you will be able to display pennants in Legion that become more ornate as you progress. Also exactly like in Diablo 3. This change could be cool though, depending on the visual implementation.

I just heard about it today, and this is already probably my most looked-forward to feature. All classes will have the same exact stat distribution. Nobody will have more crit, less hit, more strength, stamina, or anything else. I always despised this part of PvP. It involved a level of testing I just wasn’t interested in doing. I want to spend my time playing World of Warcraft, not World of Calculators. This new PvP template system is a huge win. Additionally worth noting along these lines is that enchants will not affect instanced PvP. Reducing the variables in PvP goes a long way to helping balance things out, especially for new players. This is a great change.

While I don’t like getting RNG gear, I have resigned myself to it. If that’s the worst change they make to the PvP system, I can live with it. There were a lot of other little changes that were cool, but not worth wasting your time on. I am cautiously optimistic about Legion PvP now. I’ll be looking forward to taking part in pretty much all the PvP stuff I can, including ranked play. You gotta take the good with the bad sometimes. Luckily, it now looks like the good outweighs the bad right now.

I’ll be jumping back into Azeroth soon FOR THE ALLIANCE! If you’re interesting in playing with me, let me know!