The bounty quests are dailies.  You can do them once per day, per character.  Each quest takes about 30 minutes to do.  You can take the Bounty contract quests at level 15+, just make sure to pick an appropriate planet.  Of course the higher level the planet, the less people you will have to compete with for quest NPC spawns.  Starter planet henchman quests are not available to high level characters. 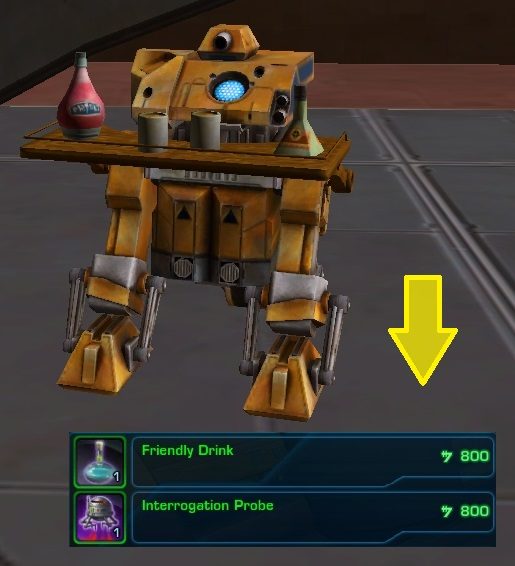 Make sure you buy 4 items for whatever interrogation method you want to use.  You can purchase these items on the droid vendors located next to the quest terminal, or next to the quest giver on each planet.  You will also be given a quest item to interrogate with, but has a much lower success rate.

The quest will then lead you to an NPC on the planet you chose.  That quest NPC sends you to a nearby cantina where you will search for Shady Characters.  Use either a Friendly Drink or Interrogation Droid to get the information you need.  Dark and Light side point icons will flash above your head when you use these items, but they do not give points.  There is a quest item you can use to interrogate too, but it has a chance to fail.  Either method can potentially cause two armed thugs to spawn and attack you along with the Shady Character.  These are standard enemies, and usually drop a consumable item called Underworld Information.  Using this item counts as one of your 4 interrogations.  Shady Characters spawn around the area randomly.  Make sure to check upstairs and outside too.

The final bounty henchman is a gold elite, so be prepared for a fight.  You may need your companion or a friend.  Again, the bounty contract will scale with the highest level in your group.  You summon the bounty by tampering with a beacon pictured below.  Once you have defeated the henchman, your quest will take you back to the quest NPC on planet.  They will reward you with a free fleet pass quest item to return to the fleet.  This works even if you are a free account.  You then take your bounty proof to a terminal in the Bounty Broker’s Association area for the final turn in. The reward is a Completed Bounty Contract.  You will also earn a little over 600 reputation with the Bounty Broker’s Association.

The Completed Bounty Contracts can be sold on the Galactic Trade Network.  You can also  turn in five completed contracts to unlock kingpin Contract Authorizations for each of the planets.  You will get a consumable item that awards 424 reputation when unlocking these contracts.

The kingpin quests follow a similar progression to the henchman bounty quests.  You start with an NPC on planet, and they send you to a location to release probe droids.  Once you release the probe droids, you use a quest item to scan them for information.  This leads you to the final location of your kingpin bounty.  The kingpins are Champions, and they spawn strong NPCs to help them.  This is doable with two players.  Once you return to the quest NPC after completing the mission, you are given a Fleet Pass item to return to the fleet.  Turning in the final chain grants you a consumable item for 424 reputation, 18394 credits, 3 Planetary Commendations, and a Completed Bounty Contract.  You can only do one Kingpin quest per day, and each Kingpin Quest can only be done once per week.  This is per character.

There are two vendors on the upper platform with all the Bounty Broker Association reputation rewards.  There are two sets of armor, and an additional helmet.

There are many achievements for the Bounty Contract event.  For the Henchman quests specifically, there are multiple named henchmen for each planet.  It randomly spawns a different named henchman each time.  You can also reset the quest if you don’t get the henchman you need.  There are also separate capture and kill achievements for each bounty as well, so you will have to visit the planets more than once.

Here’s a tip to finish these bounty quests quickly: buy your Legacy Travel unlocks.  Priority Transport: Capital World(20k), and Priority Transport: Personal Starship(50k).  You can take a Henchman quest to your capital world (Coruscant/Drommund Kaas) and a Kingpin quest to anywhere.  (This works better for Sith than Republic, but it will still save you some loading screens as Republic.)  Use your Capital World transport to travel to your first quest.  It should place you very near the beginning quest NPC.  After you’ve finished that quest, use your Personal Starship transport to teleport to your ship, where you’ll be ready to blast off to the other destination.

I’ll be updating this guide as this event continues and progresses.  If it’s missing anything, let me know.  Leave it all in the comments.  Good luck, and happy hunting!