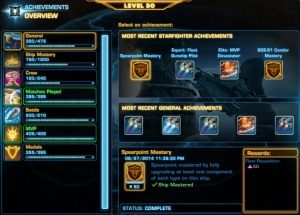 Travis via Facebook demanded I put together a guide to all the easy achievements in GSF.  If you have any requests, Twitter and the comments here work too.  If you find this helpful, don’t forget to thank Travis on my Facebook page too!

A lot of people like to go for achievements.  This guide should be helpful especially if you don’t like GSF.  When I hate something, I just like to go for the easy achievements, then go back to what I enjoy doing most.   I dug through all the achievements for Galactic Starfighter, and picked out the ones you can get fairly easily.  I define easily as less than 30 games which is about 4-5 hours of actual in-match playing time.  Add in waiting time and its probably double that for actual game time.  It’s completely doable in a few days.  This guide was also written for people that only have access to the two starter ships, including F2P players.  If you have extra ships, you’ve just got more options.

You can buy Treek for 1,000,000 credits off a vendor in the Cartel Bazaar deck.  Occasionally she goes for sale on the Cartel Market too.  If you have HK-51 already unlocked, you can buy him for 1,000,000 credits through your Legacy unlocks. Doing the questline for HK is arguably the harder to do, but that’s how you can get it free.  That questline starts in Section X.  Lots of people have one or the other, so getting this achievement is as simple as getting the one you need.  You don’t even need to GSF to get it!

Just playing 10 games gets you an achievement.  You can progress to a lot of other achievements in 10 games too.

A little hard to accomplish in 10 games, but you can probably polish this off in about 25 games.

You’ll need to think a little long-term about these.  Assists you can get in any ship.  Don’t go for kills/damage and survival medals in the same game.  For Damage and Warmonger medals, use the Star Guard.  For Untouchable medals, use the NovaDive’s hit and run proficiency.  If it gets hot, just boost out.  Use TDM games to focus on all of these achievements.

Don’t shoot if you don’t think you’ll hit.  Be conservative when going for Crack Shot.  For gunner, use the Star Guard unless you’re a good shot with NovaDive’s blasters and pods.  Technician is probably slightly easier in the Star Guard, just focus on staying alive and make sure you take Hydro Spanner as your crew skill.  It can be done with the NovaDive too, but with less health its trickier.  Again, it comes down to your confidence with the ship.

Capturing satellites is best done with the NovaDive because of its engine boosting capabilities.  Killing turrets is easy with both ships, and defending can be done with either as well.  Grabbing powerups in TDM is an achievement that screams for the NovaDive.

Keep Hydro Spanner as your crew skill at all times, on either ship.  Use it anytime you have any damage.  Both the NovaDive and Star Guard are a little light in the hull department, so they will likely benefit more than other ships.  You just need to do the most repairs in the match.  If you see a someone flying a Clarion, don’t even try to go for this achievement.  Alternately if you have a Clarion, this achievement is super easy.

You can knock this one out in your first 10-15 games.  Getting medals in GSF is easy.  Check out the guide above to see how to get the various medals.

One thought on “Quick and Easy Galactic Starfighter Achievements Guide”