Is SWTOR Moving To Horizontal Progression? 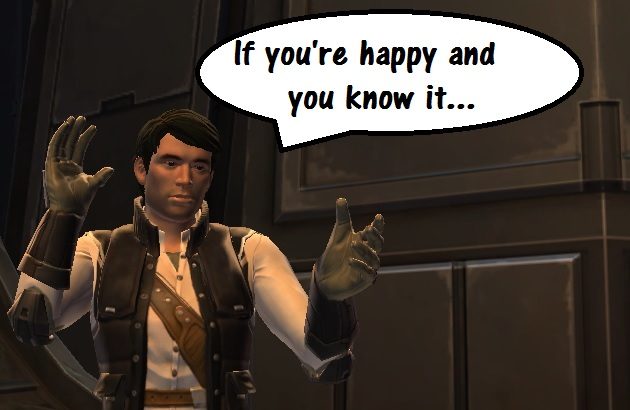 Galactic Starfighter (GSF) has brought horizontal progression to Star Wars: The Old Republic. Glory, glory, hallelujah! For those that don’t know, horizontal progression is based on skill, not levels. In GSF, your level 55 and a new level one friend can play together. A level 20 character playing GSF a lot can easily outdo a level 55 just starting. It is my preferred game style because there is no grinding to keep up, and I can play with friends across any levels. A quick glance at the games I play will confirm this for you.

Writing Is On The Wall

GSF is one, enormous, indicator. The entire GSF system is heavily based on the highly successful game World of Tanks(WoT), another horizontal progression game. Down to the daily double xp reward (which I might add that SWTOR has improved upon). The premium ships available in the Cartel Market are fully maxed out, just like premium tanks in WoT. The similarities are staggering. I applaud SWTOR for copying this system. Don’t reinvent the wheel, just improve the ride.

The Cartel Market itself leans heavily on customization and convenience options. Guild Wars 2, another successful game with horizontal progression, does the same thing. When you can subsidize a free game on convenience and customization, that takes the pressure off pay to win items. That’s a win for gamers and developers.

There is also the upcoming level neutral flashpoint. Content like this is playable immediately by everyone, and never gets out leveled. If it’s done right, it never gets overplayed either.  League of Legends (yeah, another horizontal progression game) has really done well with it’s main map, Summoner’s Rift.

What This Can Mean For SWTOR

SWTOR can easily swap to horizontal progression at this point. They can level cap at 55, and keep adding new content.  New operations, warzones, GSF maps, and flashpoints.  Daily quest hubs, new planetary quest arcs are also fair game.  Keeping a top end cap allows for easier balancing of content, which means more development time spent on adding more new content, instead of tweaking less content.  I’d say the hard part would be coding in some kind of upranking/downrank system so players can join their friends at any level.  Similar to, if not exactly like, Guild Wars 2.  This isn’t something that would need to be in place right away either, it could be a long term project for an expansion.  SWTOR’s new content every 6-8 weeks is close to perfect for keeping players busy until the ‘friend’ system is ready.  You also have new Cartel Market releases interspersed as well for more cosmetics and conveniences.  Now that I think about it, i’m wondering if it’s not something they’ve been building towards for a good long while now.

In all, I think it’s a good thing.  A big reason I haven’t returned to World of Warcraft is because of the constant gear grind.  SWTOR’s grind is not as bad, but it has its moments.  Keep your fingers crossed.