Here, there, and everywhere. 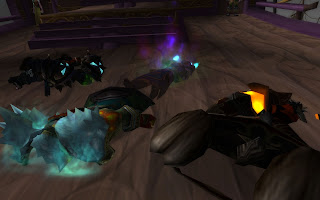 Cayreth and Nathaenai were defending Darnassus, so I tagged along.  I made it just as they attacked at the portal-tree-thing by the bank.  The Paladin with them immediately spirit rezzed and we never saw him again.

Next up was Honor Hold, so we hit the portal to Blasted Lands and found a trio killing guards.  Wiped them, took the towers, wiped them again.  Camped the towers to make sure they were as far in the blue as they could get, when WorldDefense went off again.

The Skybreaker was under attack in Icecrown, so Nathaenai and I took our tabard portals and summoned Cayreth to find a pair of Horde again, killing the guards.  The Shaman just kind of limped his way towards the edge so he could jump off, finally making it.

Back to Darnassus for the original group of Horde, we camped them onto the boat.  And then in the water.  These guys weren’t quite up to the task, so when Stormwind started calling, and the boat just happened to be at the dock, we just kept going!

Some mage named Landus had it bad for the auctioneers.  We managed to keep one alive the entire time.  He would kill two, and die.  Rez, try to hearth, die.  Rez,  kill two, die.  You get the picture.  Finally Cayreth and Nathaenai had to log, so we called it a night.  And not a second too soon, when I checked my hearthstone, there were only two seconds left!