The Best Place to Farm Gold in Guild Wars 2

The Cursed Shore.  Thanks for reading!

Seriously though, there is an area in Cursed Shore that was made for farming.  There are three outposts, with a staggering amount of dynamic events between them. 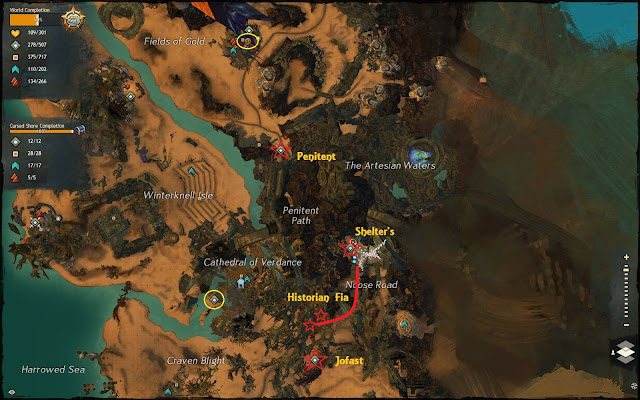 What makes this the best place to farm in Guild Wars 2 is hard to explain.

Historian Fia starts in Shelters, and leads an event towards Jofast.  Once that event is over, a second starts immediately afterwards to conclude her story.  The second event is just to kill a veteran gorilla.  So that’s almost 4 silver in DE rewards, for the same time spent on one DE.  Two birds with one stone!

*Lately this event has not been happening on our realm.  I am pretty sure it is bugged, as I ran across Fia at the end of her path, but when I revived her she just stood there and died again when a mob came by.

There are merchants to sell to, buy salvage kits and gathering tools from, as well as places to repair.  There is one in each of the three outposts.  The repair merchant in Shelters is not clearly marked, but he is the NPC by the spider gate.

The type of DE is important.  Farming an event where you kill a single champion over and over is not what i’d call ideal for farming.  Events like Halla Corpseflayer are great for farming because of the number of mobs that die.  The more mobs dying, the more loot chances.  The three main dynamic events involve swarms of loot-filled mobs rushing headlong into your instruments of death.  What more could you ask for?

There is a Black Lion Trading Company NPC in Caer Shadowfain (top).  That means you can browse the Trading Post between events, and then run up to it to collect your items or gold.  This NPC occasionally bugs out.  When I decide to farm, I generally waypoint to here first.  That way I can know ahead of time whether the NPC is working or not.

All these locations are close enough to run to.  They also last 5+ minutes so you have plenty of time to get to them and at least snag a gold medal.  If you’re really industrious, you can run out to the Cathedral of Verdance or other events nearby.  You will be close enough to them to see them as you are running around.

There are an amazing amount of resources in this farming area.  Running from Caer Shadowfain to Jofasts camp, there are probably a dozen or so nodes.  Quite often there is Orichalcum and/or an Orian Sapling as well.  The mithril and elder wood logs alone sell well on the Trading Post.  Each node you hit (at current prices) is about a silver in your pocket.

There are a couple.  One is that there are occasionally bots.  When I first found this place there were hordes of bots.  Now there’s only one or two and they generally don’t stay long.  Arena.net has found some way to detect them.  The other downside is there are just SO many people sometimes.  Don’t let either one of these dissuade you though.  I’ve always been able to clear a respectable haul from each event.  Lately I have been skipping Penitent and sticking to the southern area because it is generally the least profitable, and because the events just happen so often that I hardly have time to sell and breathe between them.

Other Places To Farm Gold In Guild Wars 2

With content releasing every two weeks, there are likely to be several opportunities to farm gold.  The Queen’s Jubilee had an amazing gold farming area below the arenas for example.  Ask around in Map chat to see if any events are going on, or check the main Guild Wars 2 website.

Questions?  Comments?  Leave ’em in the comments below.  Feel free to give your own farming tips and spots as well.