As I may have mentioned before, i’m working on a ranged build for my warrior.  While the Squad Commander build is awesome for support and a great melee build for WvW, playing a Smuggler Saboteur in Star Wars: The Old Republic spoiled me on ranged classes.  I want a build that can put someone down in a hurry.  After hours and hours and hours messing around in the Mists, I think I finally hit gold.This build is now available here! 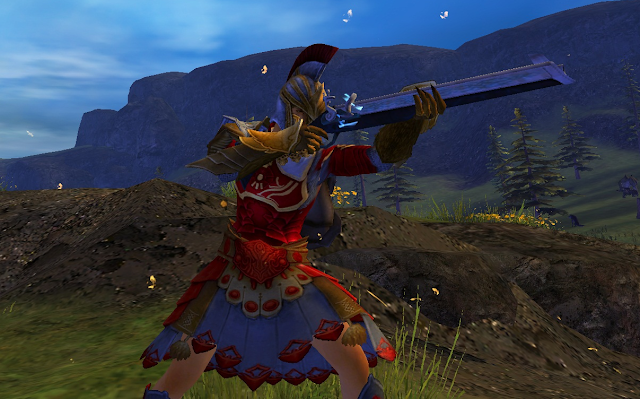 It’s a good build, don’t get me wrong.  In fact, it’s the most fun warrior rifle build I have tried yet.  My plan is to make sure it’s a viable WvW build first, as that is what is most important to me.  So far all my WvW experience has been one sided.  Either our side, or their side.  I am, respectively, stomping and getting stomped pretty handily.
After I get some more even back and forth experience in WvW, I want to try this build in sPvP.  It seems like it could really play a good DPS role with a team.  Likely this will come down to which amulet to use given it’s current performance.  Might swap a trait or two as well, but I think I can keep it within the build I have currently.
I have already run a dungeon, marathon world event, and too many Fractals with it.  I can tell you it’s decent enough in PvE as well.  I had no problems with it, and have no problems recommending it.  Dungeon run approved.
Here’s a little video footage of me testing this build in WvW.  Enjoy.  Leave your suggestions for a build nickname in the comments.  I’d like to consider a few reader’s ideas.
P.S. Thanks again to YouTube user Lela Blyler for pointing out I was calculating Volley damage incorrectly.