Foxhole is a unique game experience. The main goal is simple: kill your enemy. If it’s red, it’s dead is a very successful and storied approach in video games. While Foxhole offers a variety of, shall we say, artistic supplies to paint the world red with, it also offers completely different paths. You can literally never fire a single shot in Foxhole, and still perform completely valid and necessary functions for your team. You can stay far behind the front line, scraping together materials and sending supplies forward to fuel the war machine. Alternatively you could go Hacksaw Ridge style and be a combat medic for your squad as all hell breaks loose. Whatever your playstyle, Foxhole fits you.

I’ve stuck to the Colonial faction, or the Colonial Legions according to some of the bits of lore floating around on the maps. Bouncing from server to server, I generally come across at least one person I’ve played with on a previous server. It’s an easy way to start a group, because there’s generally always a new person around wanting to learn the ropes the right way, instead of following after someone who screams cliche war movie lines into their microphone. You generally also pick up that one person running alone on the road as you head to the fighting. Finding a group isn’t hard at all. Staying together once the fighting starts however, is another story.

Whatever role you want is chosen by the gear you carry. Rifles, HMGs, Carbines, SMGs and more are there for long-to-close range combat. Trauma bags and first aid kits for medic-healer types. HE grenades, frag grenades, gas grenades and more await you. You do have a weight limit which, if exceeded, slows you down considerably. The little encumbered warning that pops up is orange for a reason. Foxhole encourages you to specialize. Carry as much as you want, just don’t expect to move quickly, or at all if you want a little of everything.

As a general rule, I despise in game voice chat. It gets abused consistently, and I disable it as soon as I realize it’s in a game. With Foxhole, however, it’s an integral part of the game, and I like it. It’s purely based on distance, a very realistic mechanic. Enemies can also hear what you’re saying, so it adds an element of strategy to communication. It does need a little work however, primarily in the form of volume controls. Currently it’s tied to in-game sounds, which means you have to temper the game volume with the morons who think screaming into their microphone is a good idea. It is decent-sized problem, but not enough to turn away from the game. It’s my biggest complaint with the game in its current state. 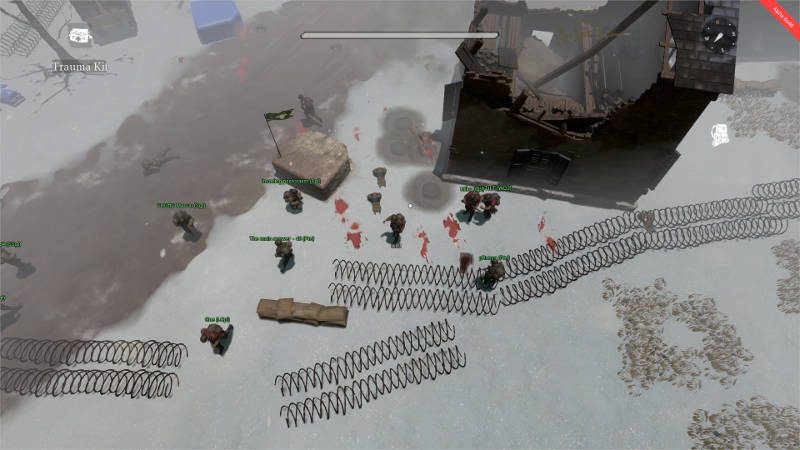 I’ve had a few ask if you can play the game solo. The short answer is yes. The longer answer is that it is a long and lonely road, and that in the mid-phase you’re probably going to hate life playing soldier. Logistics players most definitely can solo the game and feel very little impact. Soldiers are heavily impacted in contrast. You can’t heal yourself, you can only carry so much, and of course trying to take on four enemy players alone usually ends up bad. Usually.

If combat is your game, the battles in Foxhole follow a crescendo. Initially in game there’s a lot of infantry action. This is my favorite part of the game. There’s a ton of small arms shooting, doing the initial carving up of territory. Once the builders reinforce behind, the skirmishing comes to a screeching halt.

Now comes the age of foxholes and explosives. Pushing comes in small spurts, and only by the team with the best logistics support. HE grenades, mortars, and artillery field guns are key during this phase. Infantry plays a much smaller role during this phase. This phase can be a little slow as hauling enough grenades to take out a single foxhole, as well as a simple rifle and ammo, encumbers you. You become an easy target, and even if you succeed, you’ve simple knocked down one of 99 bottles of beer on the wall. I’m not sure if this is some kind of balancing issue or just not geared towards my mentality. My only other complaint with the game, but again it’s not a deal breaker. There’s usually more than one front to fight on.

Finally comes the steamrolling face. Howitzers, halftracks, and tanks are the tip of the spear. Infantry once again becomes invaluable, logistics more important than ever, but vehicle teams are what stand out here. Once all the foxholes are cleared away, the infantry has to clear the remaining soldiers hiding behind every wall and building. Cranking out the high end explosives, tank shells for example, is top priority for logistics. Vehicle teams have to keep their vehicle fueled up, full of ammo, and leading the push into enemy lines. 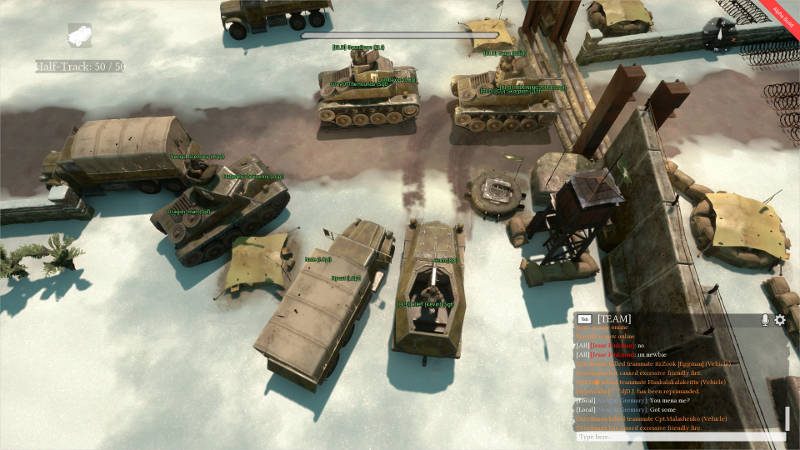 Scraps are converted to basic materials(bmats), which are the life blood of production and construction. You can make all kinds of weapons, ammunition, gear, vehicles, and other equipment with these. Higher tier vehicles like tanks require refined materials(rmats), which come from somewhere. Storks for all I know, as logistics isn’t my cup of tea. Front line soldiers place orders in Team chat, and logistics players generally fulfill those orders, hurtling down roads towards some nameless FOB in their supply trucks like the fireball express. Logistics players arguably have the most important role in the game once battle lines are drawn.

You have to play Foxhole because you love the game. You don’t get rewarded with powerful weapons or legendary loot of any kind. There are no infinite staircases of levels and skill points to grind. Loving PvP for the sake of PvP should be your motivation for playing. The only real means of progression comes from ranks, which are gained by getting commendations from other players. Usually players hand out commendations for bringing much needed supplies or fulfilling a supply request. I’ve been given a few commendations for rushing out into the middle of a fire fight and reviving downed players. I’ve also handed out a commendation for best use of the phrase ‘satchel charges’ in a sentence. Whatever behavior you want to reinforce in the community is what you reward with a commendation. It’s actually pretty stress free in that there is nothing to keep up with. Someone could pick up the game a year from now and not be behind. There are a few privileges with rank, most notably being able to leave the equivalent of a post-it-note on the map to send a message. Otherwise, a fresh player has the same advantages and disadvantages as a major.

Prominent features in early access games include bugs. Foxhole is pretty light in that regard. I’ve not crashed once. I have experienced a sound bug once which was fixed by restarting. There is a bug with crouch which I experience regularly. It can be fixed by crouching and un-crouching a few times though. There is also a stuck bug where you can’t move, and only dying will fix it. That’s it. Foxhole has had a seriously smooth launch in my experience.

As I said before, Foxhole is an experience. I’ve gotten more than a couple of friend requests on Steam. I’ve had loads of fun chasing Gandalf the Grey around, talking Warden propaganda, and working with a group of people to take an objective. I get this sense of camaraderie from the community that I wouldn’t want to trade for anything. Foxhole is probably the closest simulation to WW1/WW2 that there is. At the same time it’s still a sandbox that you can get whatever you want from it. In it’s current state, it’s worth the $19.99 price tag. Any kind of DLC or updates are going to make it worth even more. Yes, I did get a key from the devs being a streamer, but free doesn’t always translate to fun. Truth is though, I’ve played over 60 hours of Foxhole since it’s release less than a month ago. That’d be less than $0.30 an hour for entertainment. There are very few games that reach that threshold for me, and yes, I do track my play time and spending. With Foxhole’s future wide open, I doubt the battles will be getting any less intense.