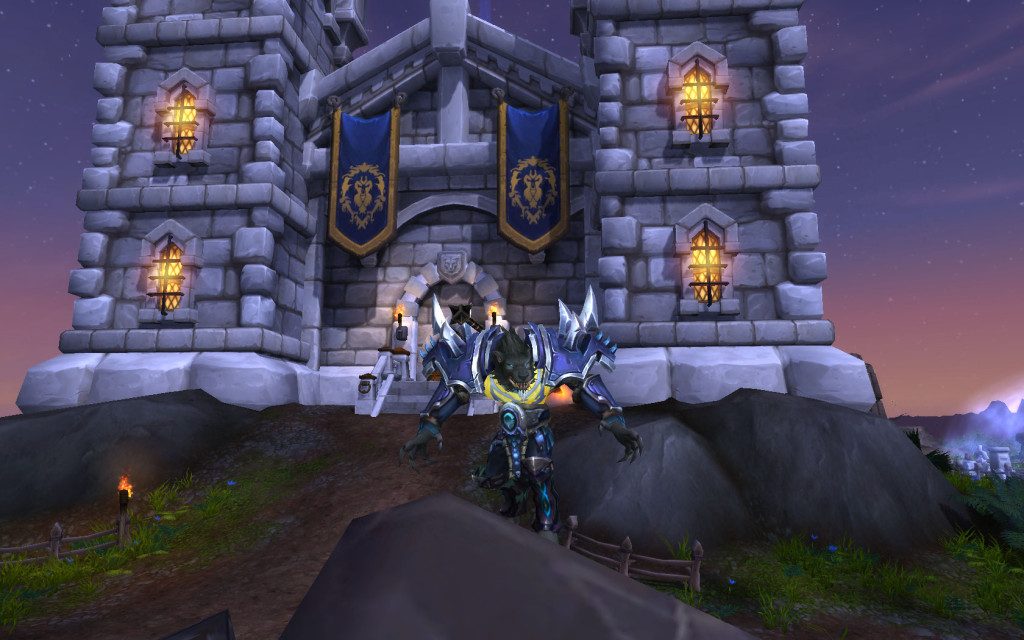 World PvP is what I love most about World of Warcraft.  It is what inspired me to start a website to begin with.  It is completely unpredictable, and can be as small or large scale as you make it.  It’s no holds barred PvP.  Below I’ve gathered everything I have learned about world PvP.  Feel free to ask any questions, or add your own insights in the comments.  This is something that will no doubt change with time.

World PvP takes at least a little bit of preparation.  It’s all about min-maxing your advantages.  While you can just jump right in, remember there are other people out there who live for world PvP.  Like me.  You never know who you’re going up against.  It pays to prepare.  Here’s how.

You absolutely must have PvP gear for world PvP.  PvP gear gets a huge level boost the instant you engage in PvP combat.  The most basic PvP gear boosts from ilevel 600 to 660.  The best gear (Conquest) goes even higher, and will continue to go higher as the expansion progresses.  Unless your PvE gear is 660 or higher, you really should have PvP gear.  There are two ways to get PvP gear;  Battlegrounds and Ashran.

Ashran is the other way to earn PvP gear.  You can earn one Strongbox of each type (green, purple, blue) from Ashran for winning a round.  I believe it’s one of each per day, but i’m not sure.  These give you a chance at PvP gear, honor, and conquest points as well.  In addition, as soon as you enter Ashran, you will want to ask to join the raid in chat.  Ashran grants you bones for each player kill.  When you join a raid, you will also get bones from the kills of other allied players if you built the Gladiator Sanctum in your Garrison.  Rewards from the Gladiator Sanctum include PvP gear, honor, and conquest points.  See the pattern yet?

Gearing up is easy.  You could probably do it in a couple of nights if you really wanted to.  You can read more about gearing up on my PvP starter guide.

Food is a big help in world PvP, stat food especially.  You don’t always have to have the top of the line, most expensive food.  Sometimes the second best food is cheap, and that’ll be good enough considering you’ll probably be dying some.  Regular food and drink is a must-have too for healing up quickly between fights.  Talk to your Master Cooker friends.  There are foods that do miscellaneous other things:

Potions, flasks, etc also make world PvP easier.  Make sure you get the flasks that persist through death.  As for potions, there are lots of potions and elixirs you can buy to help you in world PvP.  Here’s a short list:

Quest rewards as you level can be pretty helpful.  You can save these as you’re leveling, as i’m not sure going back to do the quests to get these is worthwhile for some.  They are limited use, and take space in your inventory.  Use them wisely, but don’t forget to use them!  Some examples are:

Crafted items are available from various professions.  Ask your friends and guild mates to see what they can craft.

Speaking of professions, there is one profession that stands out for world PvP.   Engineering lets you make tons of little gadgets that might be useful.  You can make portals to zip around quickly instead of waiting for a griffon.  You can make bombs for extra damage.  There’s all sorts of wild and crazy useful things do with Engineering.  Some things do not even require engineering to use, so talk to your Engineer friends to see what they can make for you.  Better yet, take engineering yourself!

Enchanting lets you add enchants to rings and necklaces.  While you can probably pick up scrolls from the AH if you don’t want to take enchanting yourself, it’s still a viable profession to take if you are PvP-centric.  Of course making your own glyphs with Inscription, potions with Alchemy, and so on, have their benefits too.

There are no more passive benefits from professions.

Joining forces with other players is they way to dominate in world PvP.  A regular group of world PvP players will always perform better than a group of random pugs. Voice chat is a must. Having a healer will provide enormous benefits, while two healers will make you unstoppable.  There are lots of channels for coordinating with solo players and groups.  Make sure you join them all.

Finding enemies isn’t as easy as it used to be.  Daily quest areas used to be the best place to find world PvP.  Without a max level daily hub, it’s harder to find lots of max level players in one place.  You can still find people though, if you know where to look.

wPvP While You Level

If you have anything to add to this resource, leave it in the comments!  Share your love of world PvP with others, and link to this page from forums and/or your guild website!