Guide To American Destroyers In World of Warships 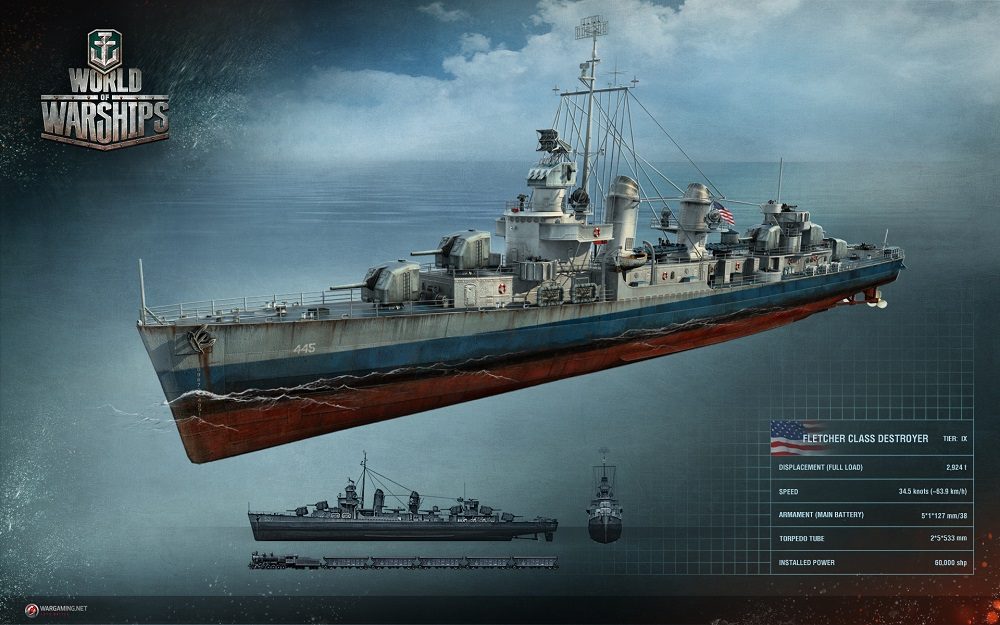 How To Play The American Destroyer Line In World of Warships

Destroyers are the fastest, hardest hitting, and the hardest to hit ships in the game.  This combination makes them perfect for someone who loves a hit-and-run playstyle.  You may open on a ship, or fire the sinking shot, but you generally won’t be focusing on a ship beginning to end (unless you get a nice torpedo volley).  Below

The big ‘thing’ about Destroyers is their torpedoes.  Or torpedees, if you’ve watched The Incredible Mr. Limpet.  Your torpedoes are what makes you dangerous, and are a significant portion of your gameplay.  When you swap to torpedoes, the white highlighted area is where you need to fire your torpedo salvo, assuming your target maintains course and heading.  If you think they will speed up, aim a little more in front.  If you think they will turn back or slow down, aim a little more behind.  Keep in mind that your own ships will have to dodge your torpedoes too.  Watch where you’re firing, and remember your torpedo range!  Friendly fire costs your teammate, the team in general, and especially you at the rewards screen.

American Destroyers will generally be using their guns more than torpedoes.  While your torpedoes are reloading, swap to your guns and get in some damage.  Additionally it may help keep them distracted from your incoming torpedo salvo.  You can outclass Japanese Destroyers in the artillery department, but they will outclass you in the torpedo department.  Also remember that you will light yourself up on the minimap when you start shooting, no matter what your Concealment rating is.  So don’t shoot unless you need to.  Use HE rounds as your standard ammunition.  If you know you’re going to be concentrating on Cruisers or Battleships, swap to AP.

Below I have broken down a Destroyer’s gameplay into the various stages of the game.  These aren’t hard and fast rules, but will give you an idea of what you’re supposed to be doing at any given time.  Remember at all times that you shouldn’t be alone.  Try to be with someone so you can cover each other’s backs.  Also you should be actively looking for enemy Destroyers.  You are the best candidate to find them, and deal with them.

Run in full speed until you find the enemy, then fall back.  You are the front line scout for your team.  Use your torpedoes to ward off enemies coming through tight spaces.  Pop smoke to avoid taking fire, and/or to cover your own fleet’s approach.  Your detection range is generally just under the 7k mark.  Pay attention to whatever that distance is.  You can find it in the Port menu by clicking on your Concealment stat on the right side.  Note there is one for sea, and one for air.

Once you’ve scouted your enemy out, it’s time to start picking targets of opportunity.  Find enemies that are alone, pushing too far out.  Help soften up the frontline targets for your Battleships and Cruisers.  Don’t forget to use your engine boosts to get in-and out-of tight spots quickly.

Pay attention to where the guns of Battleships and Cruisers are pointed.  If they aren’t pointed at you, or moving towards you, they probably don’t know you’re there.  Once they start to move towards you, it’s time to pop smoke and/or boost out of there.

Look for holes in the enemy lines.  Slip through them to find Carriers hiding in the back of enemy territory.  Continue to harass damaged enemy targets.

The One That Got Away

Generally, that’s you.  The one they tried so hard to kill, but slipped away seconds before they could line up the shot.  Knowing when to break off is an important part of playing a destroyer.  It’s going to be something you have to learn.  When you’ve done a good portion of damage, it might be time to move on.  Or at least move out of range, reset, and go back in for the kill.  Good luck on the high seas!