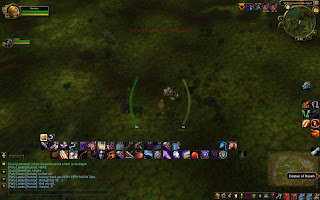 So a guild mate was out questing in Sholazar Basin.  Rusah decided to kill them…for whatever reason.  With Sloat and Chyngon as backup I guess in case a level 76 was too tough?  I was on my Rogue there snooping around with Talia anyway, and we opened up on them like there was no tomorrow!  Dead!  Dead!  Dead!  So that’s Hunter, Rogue, and Death Knight versus Rogue and Feral Druid.  NEITHER OF US DIED – WOO!  I guess you could call how I play it a Rogue, anyway.  There are entirely too many combo points still wasted.  I just keep backstabbing away with a full 5.  I should really Eviscerate more or heal.  Either way, I muddled along and it worked out!