Notes from the end of the world: Guild Perks

WARNING! WHAT FOLLOWS ARE SPOILERS FROM CATACLYSM BETA TESTING! 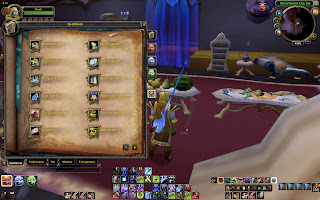 The guild that grinds together, stays together. Guild leveling and perks are coming to WoW and it is going to have a significant impact on the social side of the game. Guild loyalty will not simply be a positive character attribute you hope to find in your mates. Drifting in and out of groups/factions/servers (we all know the type) will actually result in suboptimal game play.

Most of these perks are disabled in Battlegrounds and Arena so the boost you get is best considered by its impact to world PvP. Here is a list of perks and what they might mean for world combat. (You can see from the screens that you access perks from the guild tab of your spellbook)

Have Group Will Travel: Summons all raid/party members to the casters current location. It’s like an insta-posse. You could have everyone scouting for activity all across the game and the person that finds it can summon the rest to the hot spot. Fair warning, if you get a summon from someone like say… Eohnavi, check his location before accepting.

Mass Resurrection: A free resurrection for everyone in your party/raid. It has no cool down, but a person can only be rez’d by this spell once every 10 minutes. Wipe recovery is one of the more challenging aspects of world pvp and this will really help your raid break the camp and get back in the fight. Apparently a Holy Priest can even cast this in Spirit of Redemption form.

The Quick and the Dead: You can return to your corpse 100% faster and if resurrected by a guildy you come to life with 50% more health and mana. Another excellent buff for a quick recovery after getting overrun.

Hasty Hearth: Reduces cool down on hearth by 15 minutes. Without the city portals of Dalaran and Shattrath this becomes a really decent buff to global mobility.

Mount Up: Crusader Aura for your guild, even if a paladin is not present. You probably already know that this is vital for keeping people from escaping you in the world. Of course this also means that more of your opponents will have it.

Chug-A-Lug & Happy Hour: Apparently there will be cauldrons one can summon to supply their raid with consumables like flasks. I haven’t seen them in Beta yet, but I would imagine they will be as common as feasts have been in WotLK. Chug-A-Lug increases the duration of the buff by 100%, and Happy Hour gives you 50% more flasks from the cauldron.

There are also a lot of other passive perks that increase honor, rep, gathering and exp gains, which will be nice to speed up the grind. One even gives you extra coin that goes straight into your guild’s bank every time you loot.

Clearly Cata will be all about the guild group. You will want to be in one, and you will want to make sure it has access to all of the perks. On the positive side of things people might be more loyal to the guilds they have had a hand in leveling and there might even be less of the break-up drama we have seen in the past. The negative side is that folks will only want to join the highest level guilds so it could make it difficult for smaller/newer guilds to thrive. Also breaking up a guild will be a much bigger deal so when it does happen the fall-out will be that much more dramatic.

0 thoughts on “Notes from the end of the world: Guild Perks”