So this time we have an unusual subject.  He’s mostly been Horde-side, but now he’s Alliance.  Since he was  Alliance when I talked to him, we’ll count him as Alliance.  And hope he stays.  Goochacabra has been playing World of Warcraft for four years now, all of it on Ravenholdt.  He’s spent every bit of it Horde-side except for the last two weeks.  He is now an Alliance Warrior.  He also plays an 80 Shaman and an 80 Death Knight.

His favorite thing to do is PvP.  He enoys world PvP the most, especially in Wintergrasp.  If not there, then in battlegrounds then touring enemy cities.  Due to the population imbalance, it’s a pain to find world PvP as Horde.  He can AFK in Wintergrasp Keep and still win.

In his short time here Alliance side, he finds Urzi (Frost Mage) and Stuntin (Spriest) to be particularly challenging.  As far as his time in the Horde, Wolfos would always get him when he least expected in Burning Crusade.  He also used to see Illuminato a lot, and always heard Johnr’s name but never met him in person.  He’s been hunting Johnr ever since then.

Gooch is also an avid Xbox gamer, and enjoys drinking with friends.  At first he was at a loss when I asked him for a quote, but he certainly came through, and then some, “Bladestorming within the first 10 seconds of any arena match guarantees results” Apparently not one to speak mildly, he offered a little bit of trash talk, “I dare anyone to challenge me, 1v1, arena, etc”,  “Unless you’re a Blood DK, prot or holy paladin, or shadow priest”,  “If you’re one of those, @#$% off you broken spec =P”

When I asked him what he would like to change about the server, he mentioned lacking good PvPers.  He insisted Ravenholdt does have some, but not enough.  Finding arena teams are a nightmare for him.  So if you end up on the same faction with him come Cataclysm, spam him with arena invites!  And if you don’t think you’re a good enough player, then ask to duel him.  He’s always been willing to duel me and give me pointers.  Definitely a great addition to the Alliance.  Whisper him and let him know you think so and maybe he’ll stay! 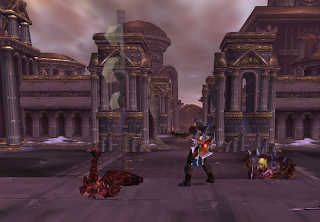