The For Honor Alpha Weekend Experience 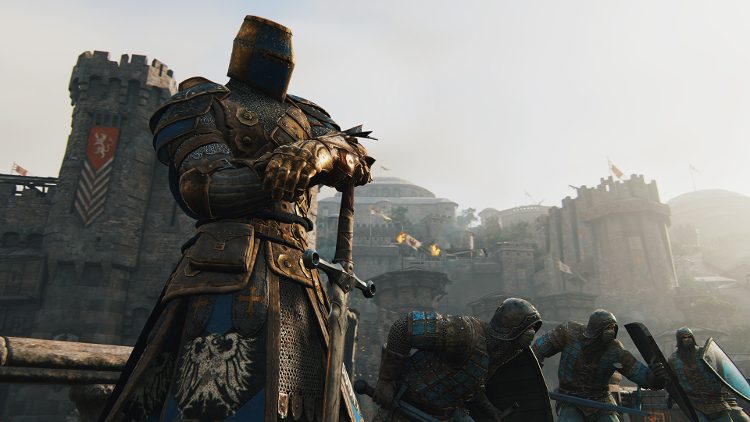 For Honor Blew Me Away

I had seen the trailer for this game back when it was first announced. Seemed interesting, so I signed up to play in the Alpha. Then I got the Alpha weekend invite, and got a little more excited. Figured it’d be a fun thing to stream for a day. I ended up streaming it for the entire weekend, and played it even more off-stream. For Honor was a surprise, sleeper hit for me. It was different than the usual games I play. Part capture-the-flag, part MOBA, with a dash of fighting game.

There are some new mechanics, at least new to me, not found in other games. The Guard mechanic was probably the most controversial. It’s something new and fun, but at the same time the implementation was just awful. Essentially you use it to block enemy attacks. It was still really clunky and awkward to use, but adjusting the sensitivity sliders helped a lot. Collision detection was  implemented, so it gave the feeling of real physics. You could throw people off bridges, and even push teammates away from ladders.

Another new mechanic was the point system. Generally speaking, 1000 points was the goal. At that point your enemies couldn’t respawn. However capturing a base would grant your team 100 points, and your enemy would lose 100 points. With 3 bases, that’s a 300 point swing. It’s a great recovery mechanic. Our team came back from a 700 point deficit during one match. As far as individual scoring, it suited me well. I don’t know how it worked, but I always got a decent amount of points.

The visuals in this game were nothing short of incredible. The graphics were just breathtaking, and I never once had any performance issues with graphics cranked up to 11.  The settings were all really detailed, as well as dark and dirty. Nothing breaks the immersion of a 100 years war like clean castle walls and pristine wood fences. I even think the gore was done well. Some blood would fly when you were hit, and your character would get a nasty visual reminder as well. If your character healed, their tunic would still remain stained by blood! Customization was GREAT. It actually mattered too. You can see it quite well on the field of battle. It gets noticed, unlike customization in SWTOR’s Galactic Starfighter. There were lots of customization options, but you were just flying by so fast that nobody could see. There was a huge variety of colors, emblems, and styles available. It was staggering.

There were 3 different game modes available. 1v1, 2v2, and Dominion (aka 4v4). I gravitated towards Dominion because I almost always had 3 or more in group. Generally I like larger scale combat, but for some reason 4v4 felt perfect. The maps weren’t massive, but designed in a way that made you feel like they were. Each capture point had a big area for fighting. There were also multiple levels of structures, so the up and down added to the battle space. I think the 4v4 was also good because the game gives you a really hopeless sense when getting beat on by four people. I can’t imagine what it would have felt like getting mowed down by more.

The Game Made You Feel EPIC

The little NPCs on your team would all step aside and let you pass if you moved through them. It gave you the true feeling of a hero, leading your forces on the battlefield. The executions were perfect. Literally, perfect. Performing the executions made you feel like you were in the final one-on-one fight of a huge battle. Being executed gave the perfect combined feeling of futility and frustration. While you were dead (because being executed added a few seconds to your spawn time) there was this overhead tactical view that you could see. It wasn’t quite what i’d call an observer mode, but you could see everything that was going on from a bird’s eye view. The perspective gave you the impression of a massive battle. The music was straight out of one of those epic medieval war movies. I’m really, really excited at the opportunity to play it again.

Commentary For Honor Of Kings and Men