You’d think I’d learned my lesson by now about judging games, but apparently not. I’d never even heard of Helldivers before until it was in the recent multiplayer Humble Bundle. Finally, towards the end of the bundle I actually looked at Helldivers. Only a few Steam friends had it, but they did recommend it. What truly sold me though was the trailer. It was in the faux-news style of the Starship Troopers movie. The best part is – the entire game is exactly like that! Bugs and all!

Helldivers is a top-down shooter that you can play solo, or in a group of up to 4. It is available for Playstation 4, as well as PC users via Steam. You can choose to join the war campaign against any of the current 3 alien races – bugs, robots, and cyborgs. Battling entails choosing a system, then a planet, and finally a mission. Each planet has a few missions for you to complete, and once you do, you are given a reward (bonus XP, weapons, vehicles, etc). Completing missions also contributes to the overall war effort. All players contribute points towards clearing the system. Once the number of points needed to clear the system is reached, a new system closer to the enemy homeworld unlocks and you continue to spread democracy! Difficulty scales in each system from easy to OMG how do I do this!? Leveling up increases access to weapons, strategems, and customization. Strategems are your special abilities. They let you call down an airstrike, or a different weapon, or maybe a tank to give a taste of freedom to your enemies.  The DLCs available to Helldivers also add weapons, strategems, and customization. They are not exclusive to DLC, just different. For example you can earn an exo-suit with missiles and a gatling gun in game, or you can buy one with two gatling guns from the DLC. Most DLC is priced at $2.99, with just the vehicle DLC hitting $3.99 so far. It’s all pretty cheap. You can buy Helldivers for $19.99 on either platform. There is also a package for $39.99 that comes with all it’s DLC. 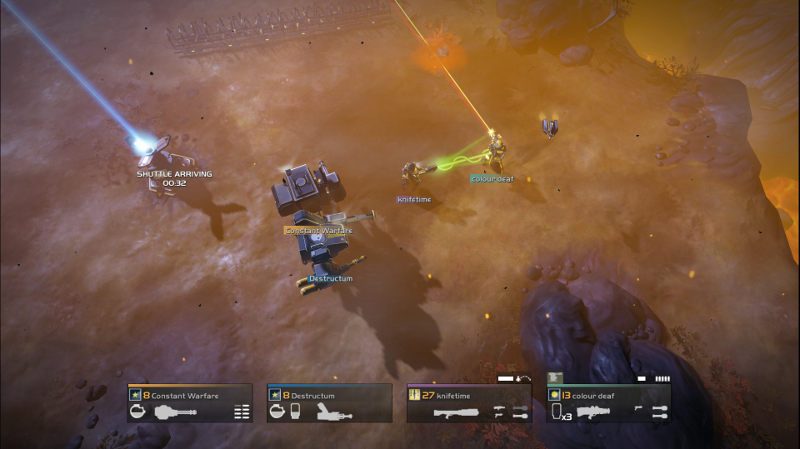 Like I said before, if you like those news reports from the Starship Troopers move, you will love this game. I am absolutely crazy about the campy, over the top patriotic tone of Helldivers. It is just so hilarious to hear your character scream, “For democracy!” or “How about another cup of Liber-tea!”. You just cannot take this game seriously if you tried. And as always, i’m a big fan of the procedurally generated maps. No mission is ever the same. The use of strategems is also fun. The whole up-down-left-left arrow gameplay entry is very nostalgic. Reminds me of entering codes on old gaming console controllers. It’s a really nice touch. The visuals are also strangely appealing. I don’t want to just slap a generic ‘good graphics’ on it, but I can’t quite put my finger on what it is I like. Maybe it’s the color contrast or color choices? Who knows? Finally, the absolute best thing about Helldivers is the team killing. OH MY GOODNESS this game is so much fun running around with four people! You don’t even mean to teamkill, but you can’t help it. With two people, it can be challenging – but four? Forget it. The game forces you all into the same screen so you can’t wander off on your own. Again, you won’t even have to try and do it on purpose, it just kinda happens in the chaos of it all. Sounds weird maybe, but it’s something you have to see for yourself.

There are a few things I don’t like, but all of them are pretty minor. The first is that you can’t change the camera angle. You’re locked into one view the entire time. You get used to it, but it still gets frustrating sometimes. Next up is the run control. Took me a little while to figure out it’s a toggle, and not something you hold down. It seems like the run control cuts off if you do anything but run in a straight line. Obviously running in a straight line isn’t something you can do a lot in this game, so even the slightest curve sometimes forces you to re-toggle. Just a little awkward, but maybe it’s intended to be that way. I can see a lot of these mechanics adding to the team-killing-chaos. The last thing I’ll add is that I don’t like the solo play. I went from playing with groups of 2-4, to playing solo, and the experience was just not nearly as rewarding. I feel like most of the fun in this game is in trying not to teamkill teammates. Removing that also feels like it removes half the fun.

This game should be played with friends. In fact, I think they should sell it in packs to give out to friends. I’ve very leery of top-down games like this. They just haven’t been much fun in the past. I’m glad I took a chance on Helldivers though. It’s one of those games you can just kinda chill out and blast things while listening to everyone laughing in voice chat. I can’t recommend Helldivers enough. My best advice is to put it on your wishlist and wait for a sale. Then show your friends the trailer, then the video above, and it should be easy to convince a friend or five to pick it up to play with you. This game has good times written all over it.