Guide To The Battleship South Carolina In World of Warships 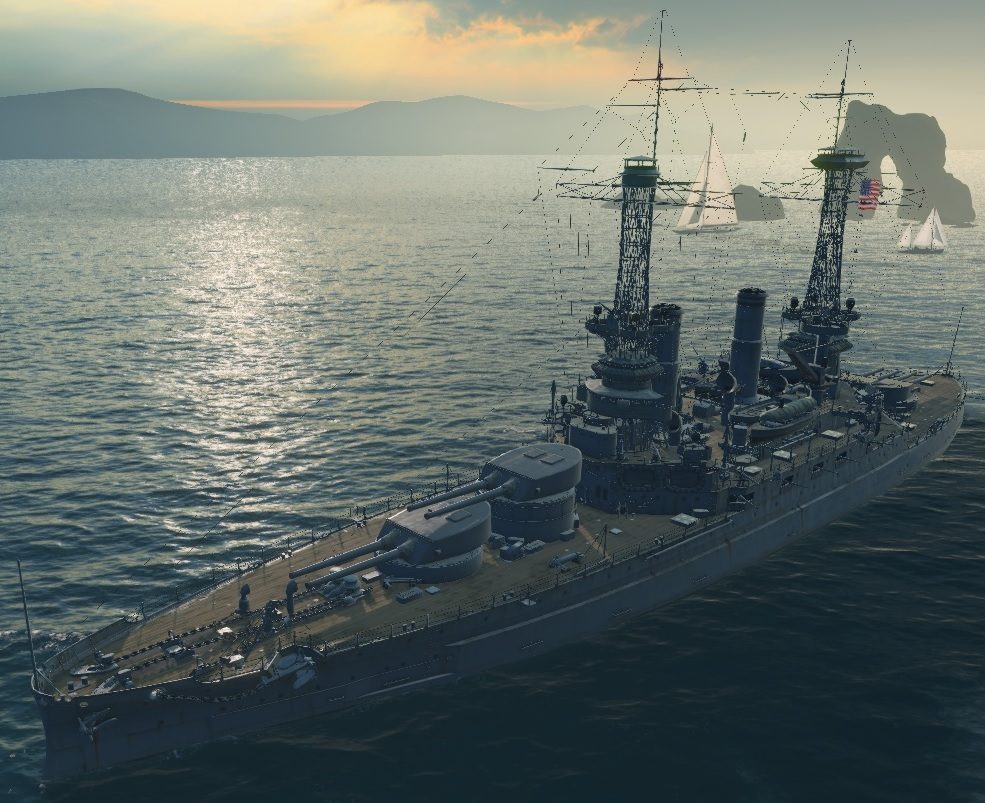 How To Play The United States Battleship South Carolina

The South Carolina is a Tier III Battleship, and the first battleship in the United States line.  It’s slow, heavily armed, and heavily armored.  If you enjoy a long range DPS role, this is the warship for you.  Some of this guide is going to repeat on future battleships.  Battleships play the same basic role, no matter what the tier.  The rest of it comes from my personal experience with the South Carolina.

The Repair skills are what you’ll want to take at Tier III.  These will get you out of a jam quicker.  The South Carolina can take a little bit of a beating, and these will help you survive a little bit longer.

Once the match begins, start out at 1/4 speed.  Look at the ships around you.  Don’t increase speed until the people around you are moving.  Then, check the minimap to see where those people are going.  You don’t want to go somewhere alone in this game.  You’re going to be very slow and vulnerable without support.  Go somewhere you have at least 3 other ships/players with you (preferably one of them a Cruiser).  I’ll generally speed up to 3/4 speed unless i’m trekking across half the map.

Picture which side of your ship is going to be facing the enemy when you get to where you’re going.  Start moving your guns towards the appropriate side of the ship.  Everything about this ship is slow, including the speed at which the turrets move.

Once you’re under way, switch your ammo to AP.  It takes 30 seconds to do this, so you’ll want to make the swap now instead of during combat.  Your main targets are other Battleships, and Cruisers.  In that order.  AP ammo will help pierce their heavy armor.  It is less effective against Destroyers, so don’t shoot them unless you have nothing else to shoot at.

Hang back close to max range while in combat.  You are very slow, so maneuvering out of torpedoes is unlikely.  You’ll also want to give Cruisers a chance to screen for you, and shoot down any bombers or torpedo planes.

Remember to use your heal(T) as soon as you take noticeable damage.  You want the cooldown to be available continuously so you can use all 3 charges during the game.

Slow down when you engage your target.  You don’t want to absently push too far into enemy territory, too far back, or up too close.  I generally kept it at 1/4 speed during combat.

Watch for your teammates ships!  Don’t ram friendlies or islands while maneuvering, or fire into a ship that parked in front of you while you were sniper mode.  It happens a lot.

Avoid getting too close to objectives.  This is mainly about avoiding Destroyers, which can drop you in a hurry.  Keep the far, outer ring of the objective in your range.  Then you’ll be able to defend any flag cap attempts.  Let your Destroyers and Cruisers capture, and you cover them with the big guns.

Monitor your minimap constantly.  If you’re winning in your area, you’ll want to start moving towards a different part of the map since it takes you so long.  Don’t help bombard a ship that’s already being targeted by 3 other people.  Somewhere in your game a teammate needs you!

The biggest favor you can do yourself is to remember you are one link in the team chain.  This game is won and lost by teams, not individuals.  Battleships in general are the quarterbacks of World of Warships.  Your teammates should react based on your movements.  Lead your team to victory!  Next stop, the Wyoming!